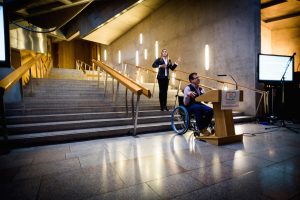 Birds of Paradise Theatre was formally constituted as a company limited by guarantee and as a registered charity in 1993, becoming Scotland’s first touring theatre company employing disabled and non-disabled actors. Since then we have been led by a number of visionary leaders and in 2012 we became disability-led through the appointment of our current Artistic Directors.

Many original aims behind the formation of the company are still familiar to Birds of Paradise today: to employ disabled and non-disabled actors and other theatre professionals, to commission new work, to work in partnership with other organisations at home and abroad, to create positive images of inclusion and to encourage participation in the arts.

In 2013 the company was awarded Projects and Programmes funding from Creative Scotland as well as receiving ongoing Projects Funding from Glasgow City Council. In 2015 the company became an RFO and in 2018 its was awarded RFO status for a further three years.

BOP has some key strategic strengths:

If you have any further questions about BOP, why not visit our FAQs page.


...the production, co-directed by McKnight and Robert Softley Gale, has no time for such soppiness; it is rude, ribald and hilariously off-colour, and bodes tremendously well for the new directorship of Birds of Paradise
- The Guardian