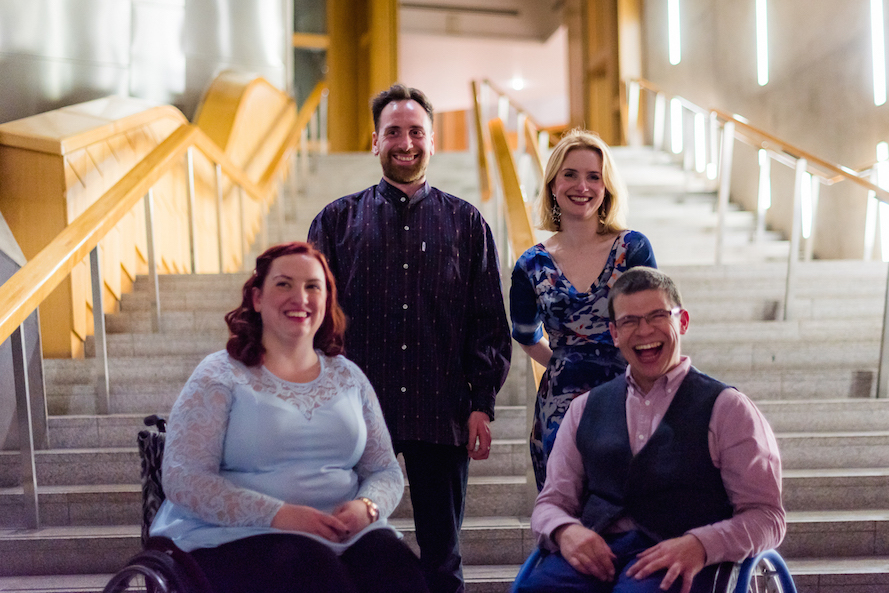 I am BOP’s Artistic Director and Chief Executive Officer – which means I work with the rest of the team in setting our programme for the year and in making sure we deliver it to the highest standards. I have responsibility for budgets – monitoring what we spend and ensuring our income targets are met. Alongside our Executive Producer I decide which productions we will do, what our projects will aim to achieve and who we will work with.

I frequently direct our productions – sometimes working with Associate Directors to realise a show. As a performer of many years I have also appeared in BOP shows, most recently Blanche & Butch, which I also wrote, and The Tin Soldier.

Robert is an established figure in the Scottish arts scene, with over ten years of experience in diverse roles including disability rights activist, actor and performer, writer, artistic director and advocate of equality of access to the arts for disabled people.  Robert has appeared in many productions and has developed his own artistic practice – including instigating, co-writing and performing in ‘Girl X’ for the National Theatre of Scotland, directed by Pol Heyvaert of Belgium’s Campo. His award-winning writing debut and solo performance – ‘If These Spasms Could Speak’ – was a hit of the 2013 Made in Scotland programme and has subsequently toured internationally to countries including Brazil and India. Robert joined Birds of Paradise as Artistic Director in November 2012. I am BOP’s Executive Producer which means I work with the Artistic Director to oversee the activity of the company. I work on productions present and future, ensuring the right teams are in place and that we have strong plans for project work connected to productions.

I also oversee our development and strategic work. Our development work is focussed on developing disabled artists at whatever stage they may be at. Our strategic work is about supporting others through training and advice and thinking ahead about projects it would be good for BOP to initiate or get involved in.

My time is spent writing funding applications, evaluation reports, meeting people, planning with the BOP team, delivering training and consultations services for others.

Mairi began her arts and equalities career in arts and mental health through the Arts Advocacy Project in Dundee and Stepps Mental Health Charity, Edinburgh.  From 2003 – 2008 she worked at Artlink Edinburgh and the Lothians where she grew the audience development role within the Arts Access Service.  Mairi left Artlink to take on the project management of the Federation of Scottish Theatre’s national Access Project 2008-2010.

In 2010 Mairi established flip – Disability Equality in the Arts with Robert Gale. Over 7 years flip worked with organisations across Scotland, UK and Europe supporting the development of better equalities practices. Mairi has experience of working with theatres, galleries and museums and with a range of audiences. In 2010 – 2012 Mairi was the Project Coordinator for engage Scotland’s access project – Everyone – and worked with galleries across Scotland to embed disability into their strategic plans. During the last 5 years working with Robert as flip, Mairi has lead on some of flip’s research and development projects including VI Scotland’s AHRC Knowledge Exchange research and the National Theatre of Scotland’s NESTA project.  Mairi also works as a producer, producing If These Spasms Could Speak (a run at the Edinburgh Festival Fringe, a Scottish Tour and International touring), with the young company Creative Electric in Edinburgh and with disabled artists Aidan Moesby and Pum Dunbar on their Unlimited R&D commission Fragmenting the Codex. Mairi believes that building relationships – whether with audiences, partners or collaborators – brings about real change through increased confidence and understanding. Mairi has a BFA MA Hons Oxon from the Ruskin (1999) and an MFA from Duncan of Jordanstone (2003). 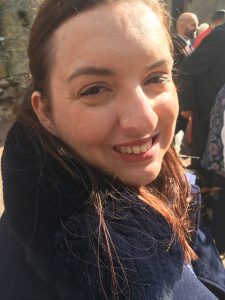 I am the Producer for BOP which means I work with the Executive Producer and Artistic Director on delivering BOP Theatre productions. I ensure the smooth running of day to day activities and communications for our productions. I also support the development and strategic strands of BOP through project work and delivering training.

Michelle focuses her career on increasing access for audience members and arts professionals alike. This is reflected by her previous work in organisations such as Shape Arts, where she led on developing a pilot scheme enabling D/deaf and disabled people to visit art venues with an access assistant for free. Similarly, as Events Producer for flip Artists, Michelle delivered events around the exhibition ‘The view from here’ that presented nine disabled artists work.

She has worked with several national organisations within technical, administrative and managerial roles. These have included Traverse Theatre, Dundee Rep, Royal Scottish National Orchestra, Falkirk Community Trust and Graeae. Michelle programmed 4 venues for Paradise Green during the 2016 & 2017 Edinburgh Fringe Festivals. Michelle holds a BA (hons) from Rose Bruford College of Theatre and Performance and a PGCert from Queen Margaret University. 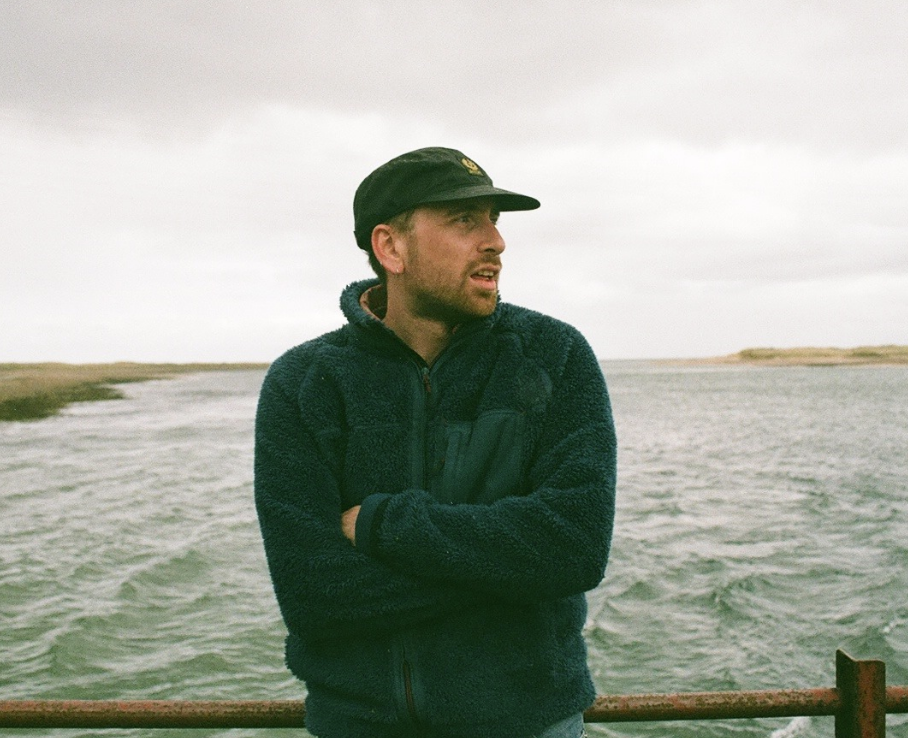 I am the Engagement & Office Manager for BOP which means I work with the Executive Producer to deliver the development, engagement and strategic projects; this includes our Youth Arts Consultants initiative, BOP Artists projects and the Access Scottish Theatre guide. I also have finance and administrative responsibilities such as managing budgets, managing the office and supporting the production team during rehearsals for creative productions.

My time is spent paying invoices, booking rehearsal spaces, meeting people, planning with the BOP team, delivering training and consultations services for others.

My time is spent paying invoices, booking rehearsal spaces, meeting people, planning with the BOP team, delivering training and consultations services for others.

Callum Madge originally trained in Arts Journalism and began working in the Scottish arts by reviewing film and theatre, eventually working as the editor for an arts and culture website. In 2013 he left journalism and began working in the theatre, starting in administrative roles but – due to the nature of working in small staff groups – also working across marketing, finance and engagement.
Callum has undertaken freelance work as a project manager on a collaborative project from the National Theatre of Scotland, Royal Conservatoire of Scotland, National Autistic Society and the NHS – looking at how the arts could be more accessible to autistic people. He has also produced work for Edinburgh Festival Fringe: in 2018 he produced Blackout, a play about alcoholism; in 2019 he was a producer on 8:8, a play exploring the Swiss referendum on deporting non-Swiss nationals convicted of crimes.
Callum is drawn to creative projects that have a strong social element, particularly work that engages and empowers disabled people. 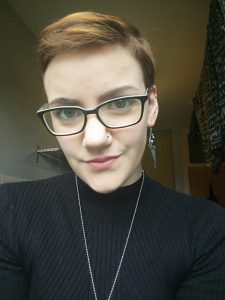 I am the Development Officer, predominantly working on BOP Young Artists, which means I work with the Executive Producer and the Engagement & Office Manager to plan, deliver and develop the Young Artists Project.

Morna is a Glasgow-based theatre-maker with 9 years experience of working in participatory arts in Scotland. Morna has worked with National Theatre of Scotland, Citizens Theatre, Tron Theatre, Scottish Youth Theatre, Youth Theatre Arts Scotland and many other creative organisations.

Here are the folk who make BOP what it is