In partnership with Luminate

“One of the highlights of my performing year!”

“Although I had performed cabaret before this opportunity and close intense support and guidance has enabled me to really believe that the issues that i am concerned with are both entertaining and serious. My confidence in my ability to perform has increased 100% !”

What did we do?

6 participants (4 older, 2 younger) worked with one Project Lead / development artist, Philippa Clark, and one further development artist, Heather Marshall, to develop individual performances through 1:1 and group sessions to be performed at a cabaret at the end of BOP’s professional tour of Blanche & Butch at Summerhall, Edinburgh.  B&B company member Kinny Gardner acted as Compere. Project partners were Luminate, LGBT Age and Birds of Paradise Theatre Company.

The final cabaret was intergenerational and accessible, with BSL, live captioning and audio description all provided.  Over 80 people attended –  66 tickets holder and 20+ others from the company and venue.

Why did we do it?

BOP wanted to run a development opportunity alongside the B&B production that would create opportunities for disabled and/or LGBTI non-professional or developing performers.  The B&B rehearsals and tour allowed access to a production, while the set and the final date in Edinburgh created a great opportunity to programme the event within the Luminate programme and to encourage a crossover in BOP and Luminate audiences – allowing both to reach new people.  We wanted to work with people who already had a practice but that would benefit from development support and the opportunity to perform in a professional context and in front of a diverse audience.

What did we do - what was the process?

Luminate (Anne Gallacher), LGBT Age (Stacey Webster) and BOP (Mairi Taylor, BOP Producer) had several planning meetings and it was a agreed an experienced project manager and facilitator, Philippa Clark, should come on board.  This was to build on her previous work with some of the participants, deepening their development, and to address lack of capacity within BOP during a very busy production period.

A call out was circulated via all partner networks and with direct contact made to certain past older participants.  All promotion was aligned with the main production and given the same prominence and importance – for instance once the cabaret was promoted, B&B cast member Kinny Gardner and cabaret compare was very visible in promoting the cabaret as well as the main production.  To recruit younger participants BOP went direct to a past BOP Artists applicant that the company wished to support in his development and to Creative Electric / Heather Marshall, the Edinburgh based young theatre company who supplied a further participant who was then supported directly in the initial stages by Creative Electric AD Heather Marshall.  While the ’older’ call out went wide the ‘younger’ call out was by invitation to ensure adequate support was in place in the tight turn around.

Project coordination was handed over as much as possible to the project lead, with BOP liaising between cabaret and production.  Phillipa met one to one with participants and then moved into group work.  Kinny Gardner attended two sessions.

Participants completed access requirement forms and information about travel and preferences around late end for cabaret, and were provided with safe space guidelines.  At the first meeting:

What was the experience of the participants?

As much as was possible participants met the cast and visited the rehearsal room (and attended opening night).

“It was really great getting to work alongside the company and watch Blanche & Butch develop.”

“developed a good working, comfortable relationship with Phil which meant i could explore sensitive issues concerned with my body. Her input was invaluable.”

“Very helpful and interesting to see what someone else gets from your work.”

“Great . So supportive, innovative, good with ideas and also not pushing her own way too much on me. Giving me space to retain my way of doing things. But I was always up for learning new ways as my performance vocabulary is limited due to lack of training etc.”

As well as from the group sessions with Kinny:

“These sessions were the best, performing and working with an established actor who was fully engaged with our processes.”

“Again very focussed. Kinny was more participatory as Phil was filming. Encouraging and fully present in his delivery.”

There was appreciation for working with and in a group:

Group work was not a key focus for all:

“Fine, but could take or leave it.”

BOP worked to ensure that the set up at Summerhall was fit for purpose which turned out to be a challenge with lack of facilities across the board.  Female and male spaces were found and the women shared with the B&B female cast members.

A rehearsal took place on the afternoon of the 14th with the BSL interpreters attending.  Access providers had also been given text and materials to prepare.  The rehearsal was run efficiently and professionally in the time provided. This professional setting was new to some of the participants and they were on the main respectful of each other as performers and of the processes involved.

“It was a different situation to me for it seemed more like a theatre production and therefore slightly other worldly.”

This time rehearsing and ‘teching’ paid dividends when it came to the performance. Kinny managed the flow of the rehearsal and also made sure that the participants were all happy and confident in what they would be doing, while giving a flavour of what he would do between slots.  One performer felt they gave their best in the rehearsal:

“I loved the dress rehearsal but just didn’t connect in the main thing. My stuff. Maybe I had done it during the rehearsal and so felt unexcited by doing it again. I didn’t get into the moment.”

BOP arranged two BSL interpreters, an audio describer and a captioner.  This was a costly aspect but one that BOP felt had to be fully in place.  All efforts were made to reduce the costs here but two SLIs were required and this costs over £1000. 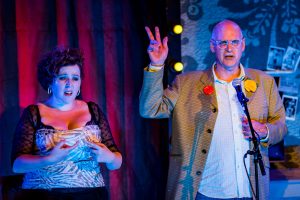 While placing it at the end of the tour raised profile and drew a larger audience one participant felt overshadowed.  While a minority view this provides learning:

“I thought we were given good space to do our thing but I did feel it became too much about the main production at the end. It should have stopped after our show.”

What were the outcomes?

100% of respondents in feedback stated that they feel more able to develop work and more confident in performing.

New skills and knowledge were acquired:

“Much more aware of new approaches and techniques.”

“It gave me a sense of what this space can do.”

Participants were more confident as a result:

“Although I had performed cabaret before this opportunity and close intense support and guidance has enabled me to really believe that the issues that I am concerned with are both entertaining and serious. My confidence in my ability to perform has increased 100% !!”

A passion to continue:

“I think it has a place to be developed, whether completely differently, or as a group we have a lot of scope to play with and really make it interesting and powerful. We are post 50 years old each with a right to share our life experiences. Some of it is still going on now……what it is like to be QUEER!”

What did BOP learn?