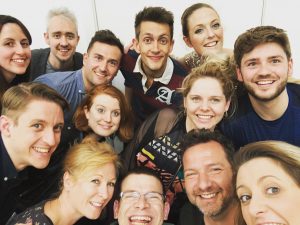 With the hustle of crowded Edinburgh pavements, thick with underpaid comics making witty comments about your favourite jacket in the hope of attracting you to their show not far away, the team at BOP thought we should probably stop stuffing ourselves with leftover cake from the parliament reception, pull ourselves away from episodes of Queer Eye and actually do some work on developing My Left/Right Foot – The Musical (MLRF). As the play is a co-production with National Theatre of Scotland (NTS) we were let loose in the aptly named ‘Big Room’ (it’s like an aircraft hanger!) in their new headquarters Rockvilla. If you are not sure what MLRF is you should probably read the info on this page for context otherwise parts of the following blog post probs won’t make very much sense.

At the time of the development week (week of April 30th) the full MLRF cast had not been confirmed so we had to bring in a development cast – AKA rank amateurs 😉 – to work with Robert and Douglas. After an initial read through of the script, the blood had drained from the faces of most of the team which was either a sign that Robert had succeeded in his intention to write a script that was in both parts a hilarious spoof on the not-quite (for copyright reasons) eponymous Daniel Day-Lewis film and a cutting commentary on the politics of non-disabled actors playing disabled characters, or, that everyone was so bored by the first draft that their blood cells had decided to migrate to below the torso, where, as we all know, things are a lot more enjoyable. 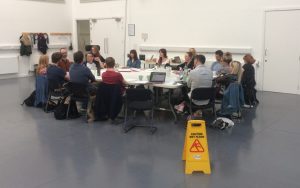 Either way, to ensure we didn’t have to add St John’s Ambulance to the production budget everyone in the creative and production teams gathered their thoughts and after everybody had thoughtfully given a considered and intellectual response to the first draft, Robert pulled his fingers out his ears and went off to type in a quiet corner, only reappearing to snaffle away the precious stocks of chocolate. While Robert was away on his own, musical directors Claire McKenzie and Scott Gilmour began teaching the development cast the parts to one of Robert’s songs they had written the music too. Two shattered windows later and the development cast were actually doing a very nice job of the harmonies so we felt that, just to shake things up, we should bring in a choreographer to introduce some much needed movement. 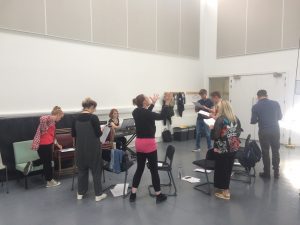 Imagine if you will, a film montage sequence. It begins with baffled actors already struggling with contentious lyrics being asked to run about the floor. Then we see the choreographer demonstrating moves with crisp precision while the development cast clumsily imitate her. Gradually the actors appear to be moving rhythmically in time as beats of four are counted with precise clicks of fingers. Oh no, someone has done the wrong move!!! This is followed by a series of quick clips: someone wearing leg warmers is on the floor on their back, legs in the air doing a cycling motion; another performer is wiping the sweat from their forehead with a white towel before it is wrenched out of their hand by a fellow performer demanding they “focus!!!”; Robert rolls across the action asking if anyone has any chocolate; someone lies prostrate on the ground crying that they ‘can’t do it’ while everyone else look a wee bit embarrassed for them. Finally however, by the end of montage they’ve got it. Imagine if the illegitimate love child of Pitch Perfect and Footloose had been adopted by The Rocky Horror Picture Show and it will give you some idea of just how glorious they now look: they are in harmony; they are in sync; they are in the zone; they are in… debted to BOP to giving them this opportunity 😉 . 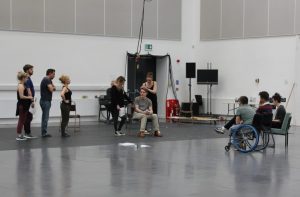 By this point, Robert had reworked the script to a point where he was happy and the actors were set to work rehearsing a short section from the beginning. Don’t worry, we’re not monsters, what with all the movement work they had done on the song, Robert let them rehearse this section as a script-in-hand reading only, so they were seated the whole time, giving them a chance to catch their breath and giving Robert and the rest of the team time to consider how the updated text was working and how – if at all – it could be further improved. After a few concentrated hours the performers were delivering Robert’s lines with the finesse of Sally Bowles and the biting tongue of Dr Frank N Furter. Because it would be a travesty to have done all this work and to not share it with anybody outside the core team we invited some other people to come and see what we had prepared. The first sharing was for staff at NTS and my-oh-my did they laugh? Yes, a lot! In fact, if the reaction from the NTS sharing is anything to go on then Edinburgh Fringe audiences are in for a treat. But we didn’t stop at just one sharing. As the major theme of the production concerns Cerebral palsy, how it is portrayed in performance and who does that portrayal, it was important for BOP to get some feedback directly from people who have CP. As such BOP invited people with CP and staff from CP charity Bobath Scotland to their own sharing and if the reaction from NTS was positive, then the reaction from Bobath was – in the words of QI’s Jonathan – YAAAAAS QUEEN!!! You can read a full transcript of the Q&A that followed the Bobath sharing and find out for yourself why it is so important for people with CP to see themselves represented in this way on stage. Those two sharings basically concluded the development week. There is still some tightening to do around the edges but things are progressing fast. We now have a confirmed cast (stay tuned for the announcement) and more songs have been written. Rehearsals begin on June 25th and we can’t wait to see you in Edinburgh.