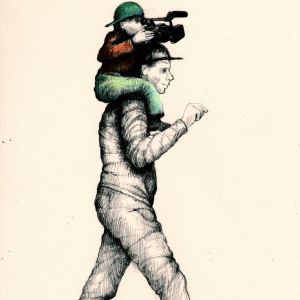 Invited by Moscow-based company KultProekt, Garry directed a new version of the play “The Last Show of Superheroes”. This was the first integrated production to be performed on a main stage in Russia and created a massive amount of media and industry interest in Russia with Garry appearing twice on national TV.

The show was a big success with audiences, played for three sold out nights, was seen by over 1125 people over its nine-night run and has now entered the repertoire of The Skomorokh. The production was also nominated for a Golden Mask (Russian BAFTA) for ‘Outstanding Production’.

Here’s a news feature on the production from Russian TV – sorry, no English translation!

Nominated for a Golden Mask (Russian BAFTA) for ‘Outstanding Production’